Fusing Glass Under Influence of the Flu

A few weeks ago, I contracted the flu.  Although I never get the flu shot (it does not respond well to my system), I haven’t had the flu in years.  And so I forgot that, no matter how much you desire, you really are not better in two days’ time.  Here’s how it went down:

I likely picked up the flu on Monday evening.  It was a long weekend, and I had not gone anywhere or done anything that weekend, since I was enslaved to my husband.  On Monday evening I went to a meeting where everyone seemed very healthy, but then I started coughing.  Tuesday morning, I was sure I was sick.  Tuesday evening, I was sure it was the flu.  Wednesday I felt miserable…but started feeling better in the evening.  Thursday morning I felt much better than Tuesday, so I thought the flu was pretty much over with.  So when Gavin’s sister Gretchen asked me on Thursday morning to go lunch and to the glass workshop, I agreed!

It was only an hour or so after I went out that I thought my idea was not the wisest idea, but since I was already out and in the midst of creating the glass, I stayed.  I decided to make more tiles like the blue ones I had made before in a previous workshop. 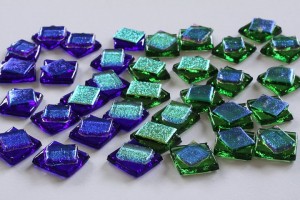 So, I made some blue ones and some green ones and then varied the iridescent pieces that lay on top.  I have plans to maybe use these to make a larger dish or maybe as a coaster set or something.  I don’t know what yet, but I do have plans.  The tiles are very pretty to look at and I think will make a good piece eventually, but what a pain to clean each and every little square before firing!  Before firing, you have to first clean the glass with rubbing alcohol, then you have to clean the glass with glass cleaner.  A lot of work for those little tiles! 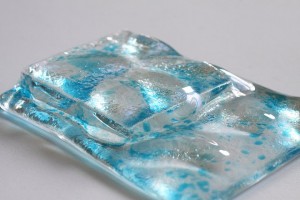 So, feeling like I should have something to show for the firing other than those glass tiles, I made two more window vases.  I was trying something new in that if you use this certain kind of glass called…flecks or something like that and place pieces of clear over the top of it, it makes the glass look a little like watercolor.  So these two window vases are first experiments as I try to figure out how to get the look that I’d like to see! 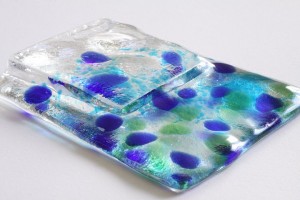 Jennifer Smith Greene is originally from and lives currently in Burbank, California with her husband Gavin Greene. Jenny completed her undergraduate degree from Woodbury University in Graphic Design. She has worked as a graphics & web designer, both as an in-house and freelance designer. She also has completed a Master of Divinity (MDiv) degree from Princeton Theological Seminary. She has worked as a hospital chaplain and in support roles in various churches. In her spare time, Jenny enjoys watercolor painting. She has taken classes and workshops under Joseph Stoddard, Tom Fong, Danny Gregory and Jane Friend. Additionally, Jenny is active in the community and volunteers her time on the Board of Family Promise of East San Fernando Valley, a social service nonprofit dedicated to helping homeless children and their families by providing shelter and support services to help the families find jobs and housing. Jenny enjoys reading (and highly recommends the site Goodreads), watching movies, playing softball and tennis and taking walks with her husband. Otherwise, Jenny is always curious to find out about those people who come to her site and would love to hear from you!
View all posts by jenny →
This entry was posted in art, blue, glass, green, iridescent glass, tiles, vase, watercolor, window vase, Workshop. Bookmark the permalink.

2 Responses to Fusing Glass Under Influence of the Flu