Knowing that I was going to work or be away the last three Thursdays of February, I decided to go to the glass workshop the week after I made the orange and blue window vases.  (Aunt Trisha, by the way, loved them!  What a fun gift!)  Since I enjoy making them so much, I decided to do some more window vases and have them partially-fused.  And, boy, am I glad I did — I think this batch turned out really nicely.

I decided to use this particular session to work on overlapping colors/shapes, to see how the glass interacts with each other.  I bought some more glass, including some small pieces of iridescent glass (which is very expensive — $9 for a piece of glass about the size of a concert ticket).  I love how these pieces turned out: 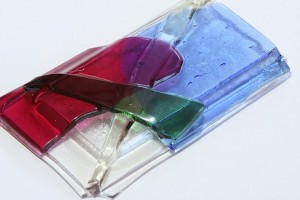 For my first piece, I wanted to overlap some of the primary-ish colors on top of each other so that I could see what colors can be made.  This is in part because I find myself a little frustrated with the color range of transparent glass.  So I used a lighter blue, a darker pink (although I didn’t know it was going to be so dark — the glass is light blue to begin with…it’s crazy what happens when you add heat!), a yellow (that I thought would be way more yellow than it turned out!) and a deeper green (just because I wanted to use it somewhere).  You can barely tell on the picture above, but one of the corners somehow was chipped off…I am debating — should I chip the other side and re-fuse the glass next time I go in so that the corners get a rounded corner?  I don’t know… 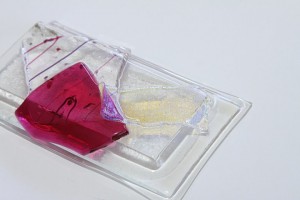 For my second piece, I wanted to pair the pink with a piece of glass I got that was confetti-ed with pink and purple pieces of glass and an iridescent piece of glass.  When the light is not shining upon it, the color of the iridescent piece is a shimmery blue/teal.  When the light shines through, the color is gold.  I love how this one turned out — transparent, but with some flair. 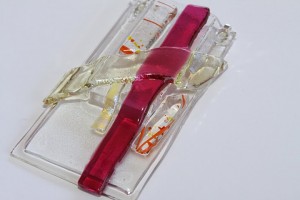 For my third piece, I thought I would use some pinks, oranges and yellows together (with a little of those same blue/gold iridescent pieces).  I forget if I’ve mentioned before how difficult it is to put colors of glass together before you fuse them.  The reason is because what you see is not what you get.  Like I said a little earlier, the color of the pink glass before you fire it is a very light blue.  The yellow I selected was just that — a pale yellow.  And the deep orange I bought (for the blue/orange vases) is also a very pale yellow. 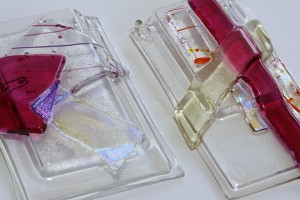 Anyway, I mention that because when I was putting together this piece, I really was not sure what color that diagonal piece was going to be.  As I worked with the yellow for earlier things, I threw the scraps in this box that I collect my scraps in.  In the box were also orange scraps.  And, if you follow from above, the orange scraps are the exact same color as the yellow scraps.  It was kind of unfortunate.  Fortunately, I think it turned out really nicely, and I suppose because I was going for oranges & yellows as being part of the color scheme, it probably would have been a moot thing anyway. 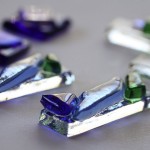 I still had room on my firing shelf once I finished these vases, but not enough time (or really enough space) to make another window vase.  So I decided to make a bunch of little bits, 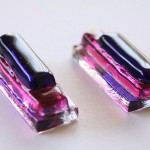 thinking that perhaps I could make them into earrings or a pendant or something.  I haven’t done anything with any of these just yet, but it is in my mind.  Next time, I might make more of those 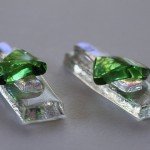 blue squares (perhaps with varying iridescent pieces on them) and then fuse those onto a larger piece.  Coasters, maybe?  A trivet?  Something else? 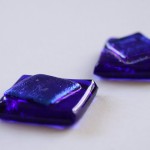 Stay tuned — a few days after I went to this workshop, I took another glass class — this time, a glass “slumping” class, which is where you fuse glass and then fuse into molds so that you can make dishes, etc.

Jennifer Smith Greene is originally from and lives currently in Burbank, California with her husband Gavin Greene. Jenny completed her undergraduate degree from Woodbury University in Graphic Design. She has worked as a graphics & web designer, both as an in-house and freelance designer. She also has completed a Master of Divinity (MDiv) degree from Princeton Theological Seminary. She has worked as a hospital chaplain and in support roles in various churches. In her spare time, Jenny enjoys watercolor painting. She has taken classes and workshops under Joseph Stoddard, Tom Fong, Danny Gregory and Jane Friend. Additionally, Jenny is active in the community and volunteers her time on the Board of Family Promise of East San Fernando Valley, a social service nonprofit dedicated to helping homeless children and their families by providing shelter and support services to help the families find jobs and housing. Jenny enjoys reading (and highly recommends the site Goodreads), watching movies, playing softball and tennis and taking walks with her husband. Otherwise, Jenny is always curious to find out about those people who come to her site and would love to hear from you!
View all posts by jenny →
This entry was posted in art, blue, glass, green, iridescent glass, pink, vase, window vase, Workshop. Bookmark the permalink.