A friend of mine is getting married this summer at the LA Arboretum and she and her fiance fell in love with this Japanese magnolia tree, that will frame them as they make their wedding vows.  Because they love this tree so much and because they want the image of a tree to symbolize their wedding and marriage, they commissioned me to create a drawing of the tree so that they could put it on their invitations, save the dates, favors, etc.

I was surprised to find that a Japanese magnolia tree is what I knew of as a tulip tree.  There were lots of tulip trees all around Princeton, and I loved seeing them bloom in the early spring.  I was surprised and delighted a year or two ago to find them scattered here and there around Los Angeles…what a beautiful tree to get married in front of! 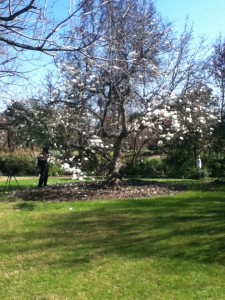 Erin had a picture that she took of the tree, but it was really difficult for me to distinguish what was the tree and what wasn’t.  I decided that it was best to go and see if I could find the tree itself and take some time to draw it from real life.  So, I downloaded the map of the Arboretum from the website and discussed with her where I could find the tree/spot they were getting married.

Then, one (fairly warm early March) day, I set-out to go and draw the tree.  On my way there, I realized that a.) I should have worn sunblock, and b.) that I should have brought some sort of transportable chair.  Since I knew there is an REI close enough to the Arboretum (one more exit off of the freeway), I stopped off there and bought myself a camper’s stool, which I now keep in my trunk for just-in-case.  After stopping to fill up on gas (that was when I winced, paying $3.92/gallon!! — what will summer be like?!), I made my way back to the Arboretum, found the tree and set-up shop. 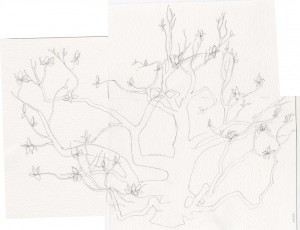 It was easy enough to find the tree, based on Erin’s directions and description of the area.  But what I was surprised to see was that the tree had no leaves or blooms…it was pretty bare.  So, I took some time drawing the tree (I brought small-ish paper, but I ended up putting three sheets together to draw the tree in totality!) and then moved to another area that had trees in bloom, and then drew some of those flowers onto my tree. 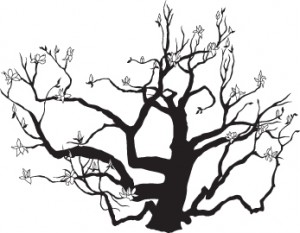 Then I came home and it took me a few hours to re-draw the tree in Illustrator.  I decided to draw each branch and flower separately so that if Erin wanted any changes made, it would be easy to re-position or remove.  That was some smart thinking on my part, because it turns out that a literal drawing of the tree was a bit too wild and unbalanced to them.  They also wanted for the tree to be smoother and to have more flowers. 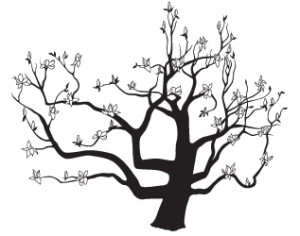 So, even though I drew each branch separately, it took me a few more hours to smooth out the tree by softening the sides of the branches, and then moving and removing some branches and then adding more flowers.

Then, I had to convert into one of the dominant colors of their wedding — an avocado green.  And, ta-da, the finished product: 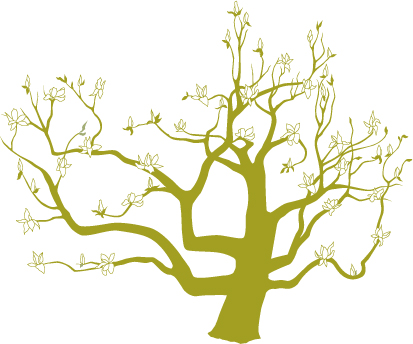 In one of my future blog posts, I will show you the save the dates I designed for her!

Jennifer Smith Greene is originally from and lives currently in Burbank, California with her husband Gavin Greene. Jenny completed her undergraduate degree from Woodbury University in Graphic Design. She has worked as a graphics & web designer, both as an in-house and freelance designer. She also has completed a Master of Divinity (MDiv) degree from Princeton Theological Seminary. She has worked as a hospital chaplain and in support roles in various churches. In her spare time, Jenny enjoys watercolor painting. She has taken classes and workshops under Joseph Stoddard, Tom Fong, Danny Gregory and Jane Friend. Additionally, Jenny is active in the community and volunteers her time on the Board of Family Promise of East San Fernando Valley, a social service nonprofit dedicated to helping homeless children and their families by providing shelter and support services to help the families find jobs and housing. Jenny enjoys reading (and highly recommends the site Goodreads), watching movies, playing softball and tennis and taking walks with her husband. Otherwise, Jenny is always curious to find out about those people who come to her site and would love to hear from you!
View all posts by jenny →
This entry was posted in adobe illustrator, art, avocado, design, drawing, flowers, japanese magnolia, la arboretum, logo, tree, wedding. Bookmark the permalink.