>Today was my first day of school in a few years. As I mentioned in a previous post, I have decided to take a watercolor class through my local creative arts center for the next 8 weeks or so just so that I am being intentional about painting regularly.  On Saturday, when I was gathering my supplies to prepare for the class, I knew I needed to stop by the art store and buy some paper, since I only had a sheet or two left.  Gavin and I dropped by after a morning of errands and discovered that Swains (my local art store) was having their annual 20% off of everything in the store sale.  I find it particularly annoying when they offer this sale because, literally, there is a line of hundreds of people that wraps around the store just to buy stuff. Needless to say, Gavin and I did not stay to buy paper and today I made do with what I had (which is quite different in feel from what I typically use)!

So, this morning I headed out to the class, which is just minutes away.  I arrived between 5-10 minutes before class started and found that I was the first to show up, other than the teacher.  The teacher (get this) is 93 years old, next month.  I couldn’t believe it when she told me — she looks at least 10 years younger.  Anyway, it seems that this is a class that a few regulars take.  I discovered this because I was told to “sit anywhere” and, when I did and people slowly entered (most 20 minutes late!), they were told, “Jennifer is sitting in your spot today, so you’ll have to sit somewhere else.”  Not exactly that welcoming, but most of the members of the class are very retired, so I suppose when you get to be that age, change is a little more difficult to deal with?
Anyway, the teacher waited for the class to show up, so the class didn’t really start until just before 10 a.m. There was a still life set up of some nectarines on this black mirrored plate (so that we could practice reflection) and I could have started in, but I wasn’t sure if the instructor was going to start out with a demo or something.  That’s how a previous class I took went — the instructor did a demo, then the class painted.  That was an excellent class and I’d be taking it again, except that it’s much more expensive and being taught by a different person.  So, I waited along with the teacher and was really disappointed that once the class got there we all could start…no demo or anything.  If I would have known that, I would have started immediately. When I got to painting, I did a quick line drawing of the still life, then set out painting.  I was excited to do the nectarines because I love laying down the strong yellows and reds and having them mix on the page.  I had a little bit of difficulty with the black, reflective surface, but I think it came out ok. And when I went to place in the detail in the painting, I discovered that there wasn’t really any detail for me to do…so I left it very rough-looking and fluid.  This is, in a sense, what I wanted to practice on–lately I have felt that I get too tight when I do my paintings. 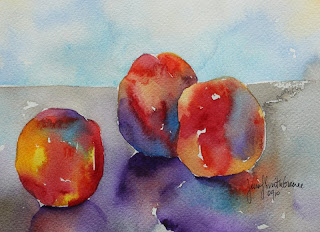 As I finished and looked around, I realized that I may already be much more advanced in skill than my fellow students — I was a little shocked to know that this was the “intermediate” watercolor class.  I also looked at the clock and was amazed that I had finished the painting (which is on the larger side for me, at around 12″ wide and 10″ tall or so) in about an hour and I still had another hour to go in the class.  So, I used one of my smaller scraps of paper that I had to do a smaller composition of the nectarines.
I finished that one in about a half hour and called it a day.  Later on this afternoon I went and got some more paper, so I should be set for the next few weeks.  Hopefully I’ll have some nice things to post up on here for you all to see over the weeks, and it’d be extra super neat if you will also be able to see an improvement in my painting (or not!).

Jennifer Smith Greene is originally from and lives currently in Burbank, California with her husband Gavin Greene. Jenny completed her undergraduate degree from Woodbury University in Graphic Design. She has worked as a graphics & web designer, both as an in-house and freelance designer. She also has completed a Master of Divinity (MDiv) degree from Princeton Theological Seminary. She has worked as a hospital chaplain and in support roles in various churches. In her spare time, Jenny enjoys watercolor painting. She has taken classes and workshops under Joseph Stoddard, Tom Fong, Danny Gregory and Jane Friend. Additionally, Jenny is active in the community and volunteers her time on the Board of Family Promise of East San Fernando Valley, a social service nonprofit dedicated to helping homeless children and their families by providing shelter and support services to help the families find jobs and housing. Jenny enjoys reading (and highly recommends the site Goodreads), watching movies, playing softball and tennis and taking walks with her husband. Otherwise, Jenny is always curious to find out about those people who come to her site and would love to hear from you!
View all posts by jenny →
This entry was posted in class, nectarines, painting, still life, watercolor. Bookmark the permalink.