The other day I was rummaging through some of my old paintings and drawings, and I found a line drawing I did when I visited Scotland in 2007.  I was visiting a friend from seminary who was doing a field education stint and two friends I met through the internet through another friend through seminary. 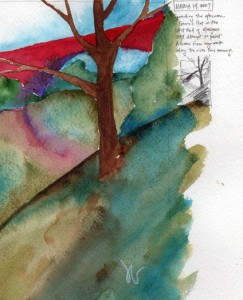 Anyway, I was visiting in Glasgow and was out for a walk one day, alongside the river (Kelvin, I think).  My recollection is that it was a really beautiful day out, even though I was there in early March.  I think I took a picture of my walk and then, from the tiny display on my digital camera, tried to draw and paint it (I brought my travel watercolor kit with me).  I drew it, but did not end up painting it.

Hence, the other day, I found a fully drawn and unpainted piece.  I decided that I’d try to paint it in, as best as I recalled, trying to use my little value sketch as a guide (I no longer know where that picture is…may have disappeared when my old computer’s hard drive failed).

I didn’t spend too much time on the painting…had difficulty getting the colors I wanted and trying to distinguish between all of the foliage and trying to get the river to look watery.  I think that the river came out not too bad.  I have debated going in and making more darks and stuff…it might make the painting better, but it also might make it too overpainted.  If I do anything to this, I’ll post an update!

Jennifer Smith Greene is originally from and lives currently in Burbank, California with her husband Gavin Greene. Jenny completed her undergraduate degree from Woodbury University in Graphic Design. She has worked as a graphics & web designer, both as an in-house and freelance designer. She also has completed a Master of Divinity (MDiv) degree from Princeton Theological Seminary. She has worked as a hospital chaplain and in support roles in various churches. In her spare time, Jenny enjoys watercolor painting. She has taken classes and workshops under Joseph Stoddard, Tom Fong, Danny Gregory and Jane Friend. Additionally, Jenny is active in the community and volunteers her time on the Board of Family Promise of East San Fernando Valley, a social service nonprofit dedicated to helping homeless children and their families by providing shelter and support services to help the families find jobs and housing. Jenny enjoys reading (and highly recommends the site Goodreads), watching movies, playing softball and tennis and taking walks with her husband. Otherwise, Jenny is always curious to find out about those people who come to her site and would love to hear from you!
View all posts by jenny →
This entry was posted in art, bridge, painting, river kelvin, scotland, travel, tree, watercolor. Bookmark the permalink.