I picked up my glass pieces on Wednesday, after a half-day at work.  I was so excited to see them, and I was not disappointed.  Some of them are sort of different from what I expected they would look like, but I really am enamored with how they came out.  Here we go, piece by piece (pictures taken by Gavin — they look good, but I am hoping to capture more pictures this weekend with sunlight streaming through): 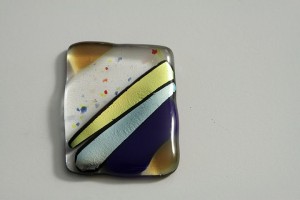 First Piece: For the first piece, we were told to take a small rectangle of glass and just build things on top of it, however we wanted, and then we would full-fuse them.  I wasn’t quite sure what I wanted to do, but I liked that clear, speckled glass and thought maybe I’d try to find glass that fit with that orange/yellow/blue color scheme.  It’s hard to tell from the picture, but the middle strip is actually a gold strip (looks a little limey on the picture) and I think that makes it look sorta out of place.  I wasn’t quite sure about that metallic glass and now I think I’ve decided that I’m not a huge fan of it.  All in all, though, I like my little piece, even though I have no idea what to do with it.

Second Piece: The second piece is a partial-fuse, which means that they don’t fuse it all the way so that the glass stays a little more chunky.  For this one, I hemmed and hawed, not knowing exactly what to do.  When I can do anything, especially at the beginning of learning how to do something, I get so overwhelmed that I don’t want to do anything.  So then I eventually thought that I might try to make something recognizable, so I sought out to make some flowers.  I decided to try it on a white background, and then I thought I should make the stems.  There are these really super thin tubes of glass that you can hold over a candle and bend.  So what you see is me trying to do that.  It was super hard — the glass kept on breaking because I gave it too much pressure.  Eventually I got it…or at least, got better at it.  Then I thought it would be fun to put down little orange squares as if they were orange flowers.  “Orange flowers,” you say, “They look more like red and gold to me!”  To which I respond, I had no idea they would turn those colors.  I swear they were orange when I started.  Then, there’s this stuff that’s basically tiny flecks of glass, which is that orange stuff in the background, which I sprinkled around, wanting to get the effect of flowers in the distance.  I also wanted to try out the flecks.  On a side note, the man who runs the shop says that the flecks come in fine, medium and coarse, but he doesn’t stock fine because they’re too dangerous — you can inhale them and cause serious damage.  Fun fact!  Anyway, I then put some clear on top of the whole thing, to try to keep everything in place.  I kind of regret doing that because otherwise the lines and the little flecks would have remained clumpier.  Any which way, I still like how it came out, although this one I’m really not sure what to do with.

So then I got thinking, “What am I going to do with all of these rectangles of glass?”  So then I thought and I thought and I remembered this one craft vendor I saw at a fair in Ventura, that made little window vases out of glass that very much looked like this kind of fused glass.  So, I tried explaining it to the teacher and he told me how to do it. 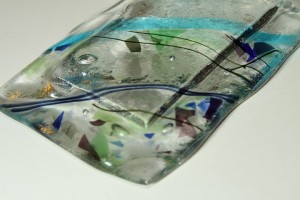 Third Piece: My third piece is (the beginning of) one of those vases that I did fully-fused.  There is a kind of glass with lines and different flecks in it, and I really liked it, so I thought I might make some sort of diagonal pattern with some of that glass that was mostly see-through, but had interest.  I also lay down some of those thin glass line thingies and I especially like how they turned out.  The bubbles were created because I think I did something wrong, but I kinda like the bubbles — they add an extra texture.  For these, you have to lay some sort of foam board stuff (that can survive the kiln) so that the glass doesn’t fuse together (and leaves enough room to insert things like flowers & twigs).  From here, now I have to apply little hoop-like things on the back with some special glue, then I have to use some sort of string through the hoop things to be able to make it hang.  I bought the hoop things and the glue…just have to get the thread stuff and make it happen.  Maybe next week! 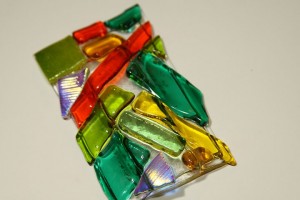 Fourth Piece: (aka the piece de resistance) (aka my favorite thing that I made that day) I had a few more moments before the class ended and I thought that as long as I had a few more minutes, that I’d try another vase.  For this one, I thought it would be interesting to get a bunch of smaller pieces (in a similar color scheme) and piece them together.  This is also where I got very, very lazy about cleaning each piece of glass (you must clean each piece of glass before placing it, first with rubbing alcohol, then with glass cleaner) and decided to only half-heartedly clean (if at all) and instead decided to piece together.  Once I finished, I realized there was no more room on the fully-fused kiln plate, which was what I intended to do.  So, I thought that I’d put it on the partial-fuse kiln plate and am just so enamored with how this piece came out.  I love its chunkiness that would have been lost if it was fully-fused, I think.  I also like how the glass looks different when looking at it plain and then looking at it through the light.  You can kinda see in this picture, but when looking just plain, those metallic pieces are a yellowy-gold.  But when you look at it through the light, those pieces turn blueish-purple.  Like the one before it, my plan is to make this into a vase, so I still have to finish it by putting on the hooks and string and stuff. 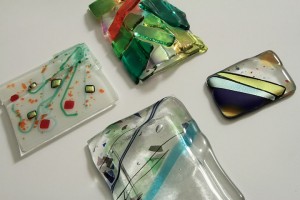 All in all, I really like how my stuff turned out.  It turns out that the place where I took my class has a weekly workshop on Thursday, where you purchase glass and pay a small-ish fee to fire a whole kiln plate, and they will let you use all of their tools and stuff to create whatever it is you want to fire.  I think that sounds like fun, so I might end up going when I have time…maybe even next week!

Jennifer Smith Greene is originally from and lives currently in Burbank, California with her husband Gavin Greene. Jenny completed her undergraduate degree from Woodbury University in Graphic Design. She has worked as a graphics & web designer, both as an in-house and freelance designer. She also has completed a Master of Divinity (MDiv) degree from Princeton Theological Seminary. She has worked as a hospital chaplain and in support roles in various churches. In her spare time, Jenny enjoys watercolor painting. She has taken classes and workshops under Joseph Stoddard, Tom Fong, Danny Gregory and Jane Friend. Additionally, Jenny is active in the community and volunteers her time on the Board of Family Promise of East San Fernando Valley, a social service nonprofit dedicated to helping homeless children and their families by providing shelter and support services to help the families find jobs and housing. Jenny enjoys reading (and highly recommends the site Goodreads), watching movies, playing softball and tennis and taking walks with her husband. Otherwise, Jenny is always curious to find out about those people who come to her site and would love to hear from you!
View all posts by jenny →
This entry was posted in art, class, glass, iridescent glass, vase, window vase. Bookmark the permalink.