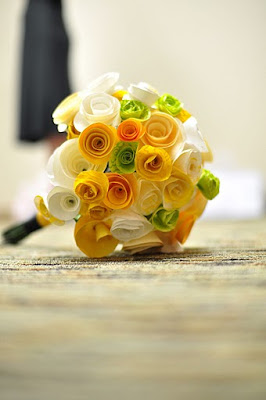 If you’re going to get married and have the cost of the wedding be somewhat reasonable, the only way to do that now-a-days is to have a DIY wedding.  As Gavin and I planned for our wedding earlier this year, budget was most definitely an issue.  As we delved into getting quotes for various goods and services for the wedding, we couldn’t believe the extreme cost of some of these things.  I mean, we expected food and photography to be expensive, but were blown away with how expensive some things were — particularly flowers.  They are beautiful and everything, but they are literally dead when you buy them, and then you throw them away after the wedding.  Both Gavin and I thought that the cost was not worth it, so we worked on ideas around that.

Originally when I was thinking about how to save money on the flowers, I had the idea in my head to trade services — I would design a website for a floral designer in exchange for the florist’s help in putting together the bouquets.  Our conversation was going really well, until the florist I was working with never gave me an estimate for how much the actual flowers would cost and stopped contacting me.  Long story short, I guess she was on a reality TV show for a couple of weeks and apparently couldn’t contact anyone (though there were several weeks before and after she was on the show when, theoretically, she could have contacted me).  Guess how fun it was for me one month before the wedding when she re-contacted me, telling me that she’d get me an estimate for the flowers “soon.”
So, obviously that florist was out.  In the couple months while I was waiting for the florist to contact me back, I began looking on various wedding blogs for reception ideas, and I ran into a post on Offbeat Bride about this woman who made her bouquet out of paper.  I saw that, and I thought it looked really cool.  But, at the time, I “had” a florist and a “plan” for flowers, so I thought no more about it.  Until I realized that the florist may never call or email again.  Then, not only did paper flowers look cool, they also felt like the best, most cost-effective, stable option.

Carrie, my sister-in-law, helped me to find an internet tutorial, and off I went, starting small at first, seeing how feasible this option was.  I was nervous that everyone would think that they were super lame and that it would be obvious that we didn’t want to spend a gazillion dollars for flowers, but it turned out that the response I got from family and friends was very positive, which encouraged me to continue on in this quest.

Soon after, I discovered that I really loved putting these paper flower bouquets together.  Sure, it takes a lot of time, and makes your living space look a little disheveled, but I soon discovered that the flowers were worth it.  And, by the time I knew it, I had put together one bouquet.  Only three more to go, which turned into 5, since Gavin’s sisters (who were groomspeople) decided that they would each rather have a bouquet instead of a boutonniere.
A little daunting, considering I started this project a month or so before my wedding, but really it may have helped me to keep sane throughout the whole wedding process.  It was helpful for me to do something physical, with my hands, during a very, very stressful time of my life.

And now, on the other side of the “big day,” I am really appreciative of the flowers, which were an additional takeaway for my bridesmaids and myself.  I don’t know what the others have done with their bouquets, but mine sits on Gavin’s desk in our office, in a vase and is a lovely remembrance of a really, really wonderful day.
I really miss putting together the paper flowers.  They were one of my most favorite things to do before the wedding, and now I have no occasion to make them.  However, it’d be neat if I were contacted by someone who either was at my wedding, or who knew someone who went to my wedding or whatever, and they commissioned me to put together bouquets for their wedding!  It definitely would be cheaper than going with a florist, at least in this part of the country.  Things like that sometimes happen!

Jennifer Smith Greene is originally from and lives currently in Burbank, California with her husband Gavin Greene. Jenny completed her undergraduate degree from Woodbury University in Graphic Design. She has worked as a graphics & web designer, both as an in-house and freelance designer. She also has completed a Master of Divinity (MDiv) degree from Princeton Theological Seminary. She has worked as a hospital chaplain and in support roles in various churches. In her spare time, Jenny enjoys watercolor painting. She has taken classes and workshops under Joseph Stoddard, Tom Fong, Danny Gregory and Jane Friend. Additionally, Jenny is active in the community and volunteers her time on the Board of Family Promise of East San Fernando Valley, a social service nonprofit dedicated to helping homeless children and their families by providing shelter and support services to help the families find jobs and housing. Jenny enjoys reading (and highly recommends the site Goodreads), watching movies, playing softball and tennis and taking walks with her husband. Otherwise, Jenny is always curious to find out about those people who come to her site and would love to hear from you!
View all posts by jenny →
This entry was posted in bouquet, flowers, paper, wedding. Bookmark the permalink.