Remember when I went to that floral design class in Venice last summer?  Where I made the submerged floral arrangement? Well, as part of the class, they gave us the vase and a sheet of paper that told us of other flowers we could submerge in water.

Ever since, I have been trying to figure out other things I could submerge into an arrangement.  The problem was that a.) I don’t have a yard to do clippings from, and b.) I feel weird about clipping from other people’s yards, and c.) they don’t really sell the types of things you can submerge at florists and supermarkets, etc.  So, I’ve been stalled.  But then I found a twig the other day and I thought, “Hey, I can stick this in there (without water) and it looks pretty nice (at least, nicer than an empty vase).”

Then I went to the second class I signed up for in November (at FloralArt LA), where we made a wreath, and I recognized the woman across the table from me…she was in the submerged vases class.  I asked her if she had figured out how to use the vase again, and she mentioned a bunch of different ideas, including using succulents.  Funny enough, I decided to put succulents in my wreath that I created and, once the wreath had seen better days, I decided to submerge the succulents with the twig, to repurpose both floral arrangements. 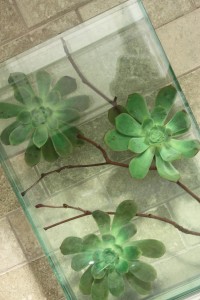 Just like the first arrangement is way harder than it looks, this arrangement also was quite hard to do.  For one: twigs float.  So I had to arrange the succulents in such a way so as to block the twig from floating out of the arrangement.  Secondly, the arrangement is a little messy, because you have to start with some water in the vase before you start plunging the items in, and so there was water everywhere when I was trying to do this.  Third, the succulents were a tad too thick for the vase (which is only about 1.5 or 2 inches deep–see cool side picture that Gavin took, below), so I had to cut them down a bit, but then encountered the problem that when you cut them down, some of the outer leaves fall off. 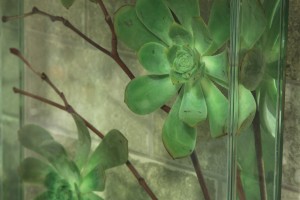 All in all, though, I am glad that I figured out a way to use the vase again.  I will have to get thinking about other things I can submerge.  Right now, the water is out (again) and the twig is back in, bone dry.  I have been thinking I could maybe spray paint it a color (since it’s sort of faded by now) and create an interesting composition that way…we’ll see.

For those who are interested in taking the class, I have noticed on their newest classes schedule that there is a “submerged blossoms” class.  Their classes are a tad expensive, but they do serve you some light appetizers and usually some sort of alcoholic beverage and it’s an evening out and you get to take home a really nice arrangement that actually lasts for most of the month.  I am on the fence about taking a class in the future…I learned in November that it’s rough for me to go to this class alone.  So, if you’re interested in signing up for one and want a buddy to go along, let me know!

Jennifer Smith Greene is originally from and lives currently in Burbank, California with her husband Gavin Greene. Jenny completed her undergraduate degree from Woodbury University in Graphic Design. She has worked as a graphics & web designer, both as an in-house and freelance designer. She also has completed a Master of Divinity (MDiv) degree from Princeton Theological Seminary. She has worked as a hospital chaplain and in support roles in various churches. In her spare time, Jenny enjoys watercolor painting. She has taken classes and workshops under Joseph Stoddard, Tom Fong, Danny Gregory and Jane Friend. Additionally, Jenny is active in the community and volunteers her time on the Board of Family Promise of East San Fernando Valley, a social service nonprofit dedicated to helping homeless children and their families by providing shelter and support services to help the families find jobs and housing. Jenny enjoys reading (and highly recommends the site Goodreads), watching movies, playing softball and tennis and taking walks with her husband. Otherwise, Jenny is always curious to find out about those people who come to her site and would love to hear from you!
View all posts by jenny →
This entry was posted in arrangement, art, class, design, floral, submerged, succulent, twig, vase. Bookmark the permalink.