As my sister-in-law Carrie pointed out to me today, it has been awhile since my last post.  And it has nothing to do with not having any creative ventures going on.  Actually, this past fall saw me really busy.

Right around my last post, I went to the doctor and discovered this: 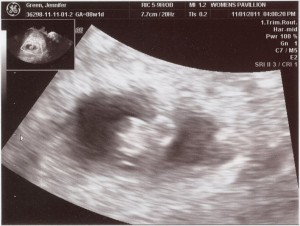 It turns out that thing is a baby.  And that baby takes a lot of energy.  And at the time, that baby made me never want to see or touch food ever again.  Ever.

And then the baby turned into this about two weeks later: 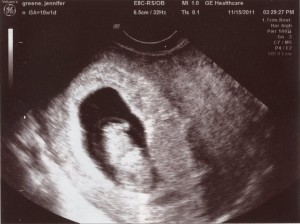 A little bit more recognizable as a baby, but still very, very tiny – about the size of a kumquat.  And yet still making me feel incredibly tired and incredibly sick.  At around the same time, I started a new job working part-time for a small graphic design studio in Burbank.  It’s been awhile since I started a new job, so I totally forgot how exhausting it is!  Between the exhaustion of the new job and the exhaustion of growing a baby, I  do not remember doing much of anything except for sleeping in November.  And when I was awake, I was wishing I was asleep.

A couple of weeks later, the baby looked like this: 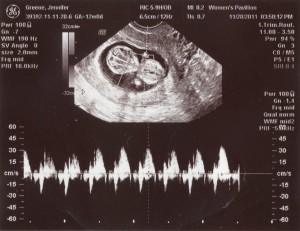 I think this picture made me happier than I was at the previous two visits because you can sort of begin to tell that it’s actually a baby.

Then, a week later, we had an in-depth ultrasound to test for likelihood of genetic abnormalities, and these two pictures came about: 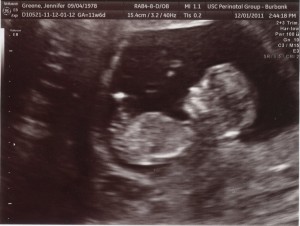 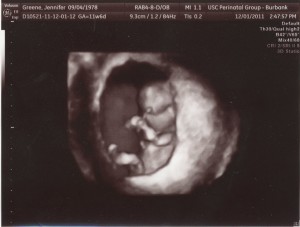 The first one is cute, the second one is 3D and a little creepy to me.  The “sucking the thumb” look is one that comes up often in ultrasounds I’ve had after this (but can’t find the photos for).

But, there it is — my excuse for not posting anything since the beginning of November.  But now I am around 19 weeks pregnant and am told the baby is about 6 inches in length and the size of a large heirloom tomato.  I am also feeling much better in general (although I still have moments of sickness or exhaustion), so I think I’ll take this opportunity to show you a bit of what I’ve been doing this fall (other than the baby-making) — painting, glass work and cooking!  Maybe other things, too!

Jennifer Smith Greene is originally from and lives currently in Burbank, California with her husband Gavin Greene. Jenny completed her undergraduate degree from Woodbury University in Graphic Design. She has worked as a graphics & web designer, both as an in-house and freelance designer. She also has completed a Master of Divinity (MDiv) degree from Princeton Theological Seminary. She has worked as a hospital chaplain and in support roles in various churches. In her spare time, Jenny enjoys watercolor painting. She has taken classes and workshops under Joseph Stoddard, Tom Fong, Danny Gregory and Jane Friend. Additionally, Jenny is active in the community and volunteers her time on the Board of Family Promise of East San Fernando Valley, a social service nonprofit dedicated to helping homeless children and their families by providing shelter and support services to help the families find jobs and housing. Jenny enjoys reading (and highly recommends the site Goodreads), watching movies, playing softball and tennis and taking walks with her husband. Otherwise, Jenny is always curious to find out about those people who come to her site and would love to hear from you!
View all posts by jenny →
This entry was posted in announcement, baby, sneak peak. Bookmark the permalink.

2 Responses to Back from snoozing