Two good friends of mine, Terrence & Liz, got married two years ago, a destination wedding held in Italy on the island of Capri.  Although I really wanted to travel to their wedding (and see Italy, much less Capri!), I just couldn’t do it at the time.  Shortly after they got back, I told them that I wanted to paint them a series of fruits and veggies for their wedding present, since they already had been living together and didn’t seem to need a new pot or pan.

Their choices in fruits and vegetables were really colorful and difficult: red cabbage, pomegranate, butternut squash and kiwi fruit.  It took me awhile to finish all of the paintings, even though they were small, in part because I started with the kiwi, which just did not go well in the first draft.  At all.  But, fortunately, I pressed on and was able to finish the first (successful painting), of a red cabbage: 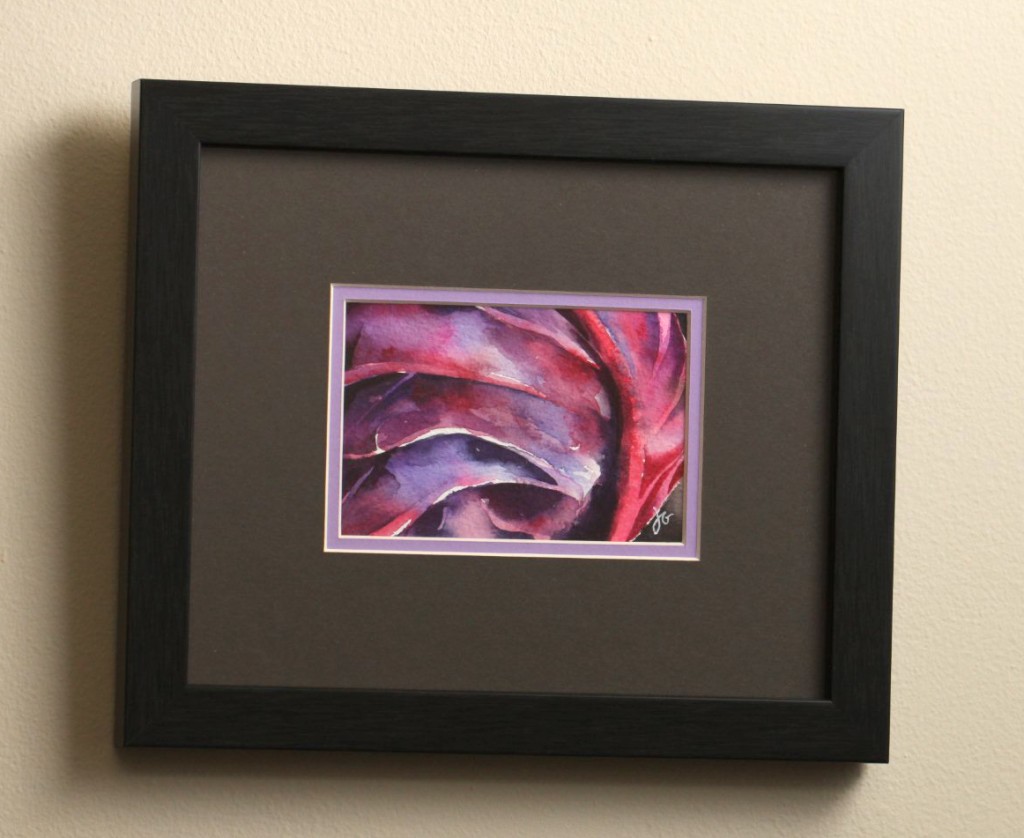 I cannot tell you how much I love the drama and motion of the red cabbage.  I am very, very proud of that painting.  After the cabbage, I painted a butternut squash.  I found a picture of one cut open, which I thought was much more interesting than the outside of one, which is really quite dull: 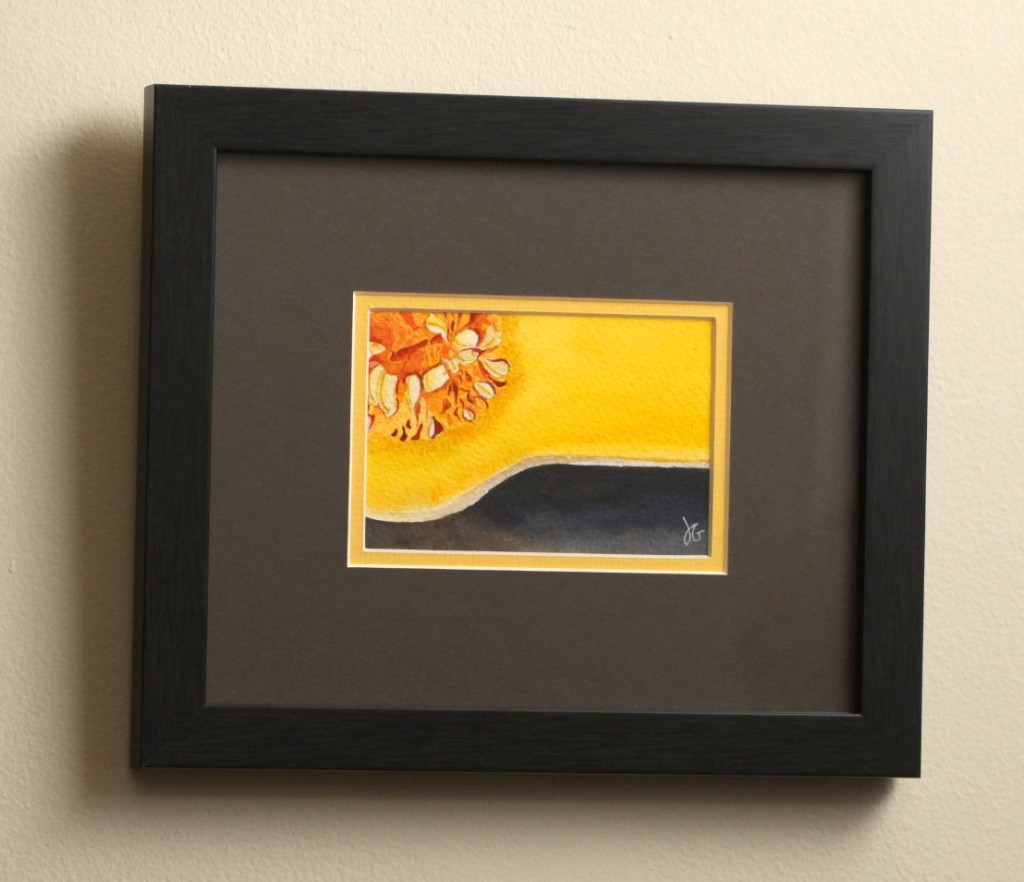 I like how this one came out, contrasting the smoothness of the inside of the vegetable with the very textured seeds/guts.  After painting the squash, I then turned to their third fruit, a pomegranate.  I have previously painted a pomegranate as a gift for my mother-in-law that I really like, so I was a little nervous that this one would come out as good: 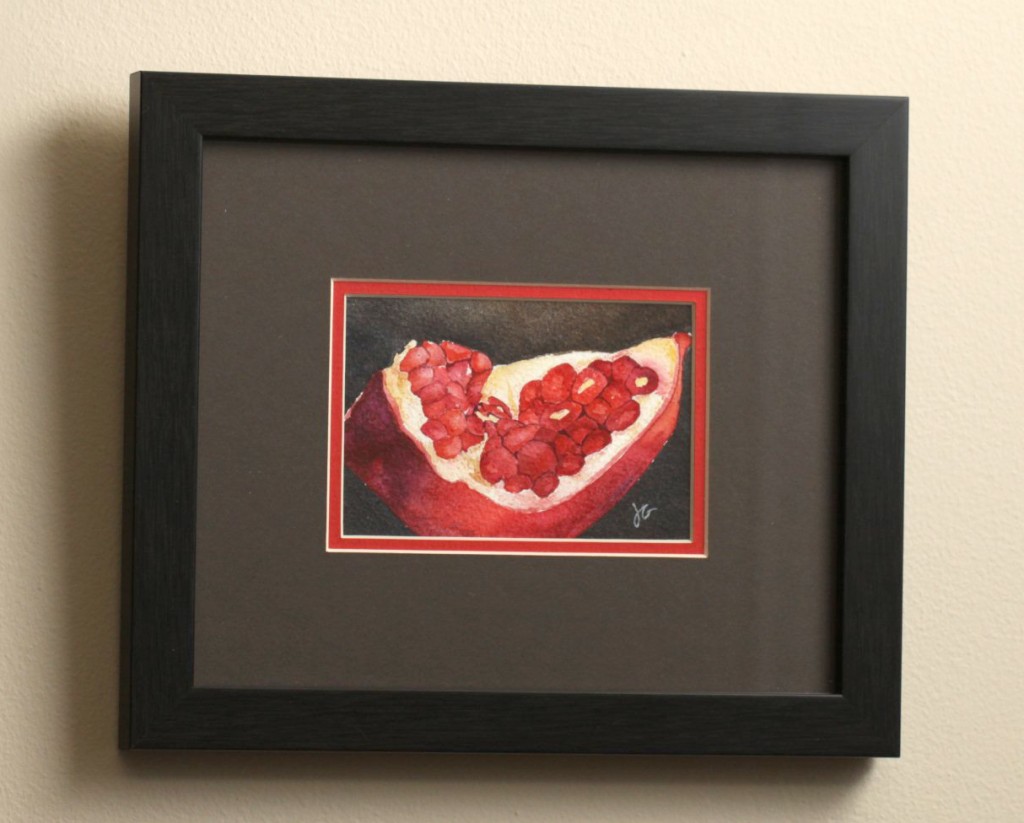 I am happy with how it came out, although I wish I would have left a little more white in the seeds to make them a bit more luminescent. So once I finished the pomegranate, the truth was before me: I had to do the kiwi.  So, I just didn’t…for a number of months.  I was too afraid, after the first attempt.  But, one day I got the courage to just apply the paint to the paper and see what would happen: 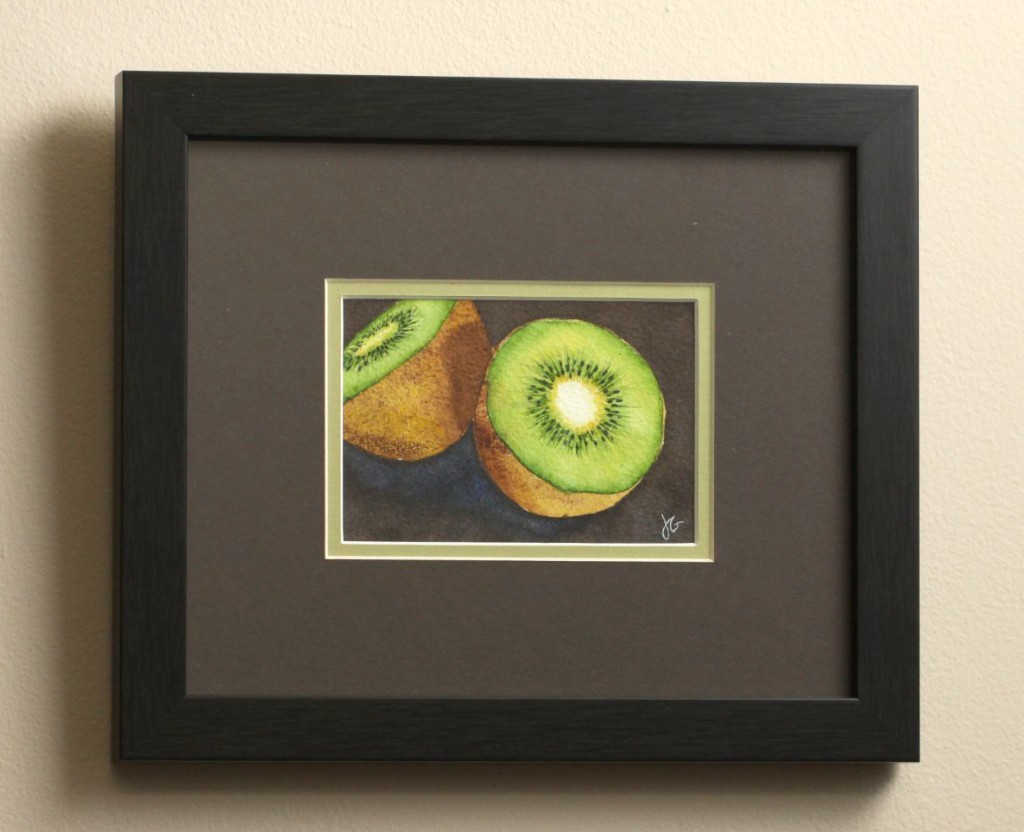 And how surprised I was!  I think that the kiwi fruit painting came out really, really well.  WAY better than my initial attempt.  And my brown paints were a bit old/dry, which created this wonderful texture on the peel — I couldn’t have attempted anything better to indicate the fuzziness of kiwi fruit skin.

A note on the framing:  I highly recommend a local picture framer, Art at Azteca Frame in Burbank.  Art is the master at taking the artwork and putting it at the next level with the framing.  We ended up going with a dark mat to match the background of the paintings and a brightly colored fillet to match the brightness of the produce.  I think that it came out so nicely — the darkness really helps the vividness of the colors to pop.

Jennifer Smith Greene is originally from and lives currently in Burbank, California with her husband Gavin Greene. Jenny completed her undergraduate degree from Woodbury University in Graphic Design. She has worked as a graphics & web designer, both as an in-house and freelance designer. She also has completed a Master of Divinity (MDiv) degree from Princeton Theological Seminary. She has worked as a hospital chaplain and in support roles in various churches. In her spare time, Jenny enjoys watercolor painting. She has taken classes and workshops under Joseph Stoddard, Tom Fong, Danny Gregory and Jane Friend. Additionally, Jenny is active in the community and volunteers her time on the Board of Family Promise of East San Fernando Valley, a social service nonprofit dedicated to helping homeless children and their families by providing shelter and support services to help the families find jobs and housing. Jenny enjoys reading (and highly recommends the site Goodreads), watching movies, playing softball and tennis and taking walks with her husband. Otherwise, Jenny is always curious to find out about those people who come to her site and would love to hear from you!
View all posts by jenny →
This entry was posted in art, azteca frame, beautiful, butternut squash, colorful, dark, drawing, framed, kiwi fruit, painting, pomegranate, red cabbage, watercolor. Bookmark the permalink.