Wanting to get into the holiday spirit by crafting up something nice to display, my friend Amy invited me to join her at a craft night held in West LA by Morgan Moore.  Amy had been following this woman’s blog for awhile and signed up to join in the craft party, and asked me if I wanted to come along, since she knows that I am inclined to arts & crafts type stuff.  So, I signed up and eagerly awaited spending a fun night with Amy.

Neither of us knew what to expect, but were pleasantly surprised that it was a nice night.  Due to absolutely no traffic on the 405 (what planet were we on?!), we were two of the first to arrive.  In total, there were about 10 or 12 women.  Most of the women who were there knew Morgan through her church and seemed to be grateful for a time of fellowship with women (away from their husbands and kids).  Morgan made us a nice dinner of some meatballs, a sort of bacon-y, cheese-y green salad, a very nice relish tray (ooooh, how I love black olives…I may have eaten half!), and some other things that I can’t remember…other than the most delicious fudge ever.  Yum!

After dinner, we got to work on the first of three crafts (Amy and I only ended up creating two of the three because the night was getting long).  The first craft were three glitter Christmas trees (you can see a glimpse of Morgan’s on this post).  The trees were inbetween 6-12″ or so, and involved tracing shingle-like patterns on scrapbook paper, then cutting them all out, then glittering the edges of the shingles, then hot-gluing all of the shingles on the tree, and finishing it all up with a cone shape to top off the tree.  This was a LOT of work.  I think I was the last one to finish (I thought I would never be finished!), and boy was I glad to move on.  The trees are very pretty (although I ended up throwing out my tall one because it looked kinda funny…I think I rushed it at the end), and I am currently displaying them behind this “Harmony” wooden statue Gavin and I  got for our wedding, of a man and a woman embracing.  So, now it looks like they are embracing in a mini Winter Wonderland. 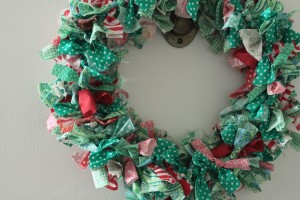 The second craft was putting together a fabric wreath.  Earlier in the day I made a real wreath (made out of juniper, I believe — a separate post in the future!) and in November I put together a “modern” wreath made out of some sort of moss, a class I took at Floral Art LA (unfortunately, I don’t think I got a picture of it, so probably no post).  I love to make wreaths, and have contemplated making a wreath per season…maybe in the future, as time allows.

To make the wreath, we had a wire wreath base, and then there were TONS of fabric scraps (about 2×6 in. in size) that we tied in knots around the wire base until it finally filled out.  We both started the wreath at Morgan’s, but it was getting late, so we grabbed a bunch of fabric scraps and decided to finish at home.  The next day, Gavin and I sat down to an episode of Grey’s Anatomy, and I had that wreath finished in no time (and used almost all of the fabric scraps I took — good estimate on my part!).

All in all, a nice night.  Both Amy and I thought it’d be a fun idea to do something like this in the future, but with a group of people we know.  Yes — an idea to come.  I’ve thought about doing this and have a card-making night…we’ll see.  Stay tuned and, if you’re in the area and would be interested in a craft night, let me know!

Jennifer Smith Greene is originally from and lives currently in Burbank, California with her husband Gavin Greene. Jenny completed her undergraduate degree from Woodbury University in Graphic Design. She has worked as a graphics & web designer, both as an in-house and freelance designer. She also has completed a Master of Divinity (MDiv) degree from Princeton Theological Seminary. She has worked as a hospital chaplain and in support roles in various churches. In her spare time, Jenny enjoys watercolor painting. She has taken classes and workshops under Joseph Stoddard, Tom Fong, Danny Gregory and Jane Friend. Additionally, Jenny is active in the community and volunteers her time on the Board of Family Promise of East San Fernando Valley, a social service nonprofit dedicated to helping homeless children and their families by providing shelter and support services to help the families find jobs and housing. Jenny enjoys reading (and highly recommends the site Goodreads), watching movies, playing softball and tennis and taking walks with her husband. Otherwise, Jenny is always curious to find out about those people who come to her site and would love to hear from you!
View all posts by jenny →
This entry was posted in christmas, craft, night, tree, wreath. Bookmark the permalink.