Although the Empty Bowl fundraiser is not until early June, there is much to be done, including advertising the event.  One of the fun things about doing the graphics for Family Promise is that I get to do things that I don’t ordinarily do for other clients…or, at least, don’t do regularly.  In this instance, I had to produce a couple of different flyers for this event, tickets, PowerPoint slide and a bulletin insert to advertise the event among the different congregations who are a part of our Family Promise network.  All of the materials needed to have the same look, but also had to communicate different things. 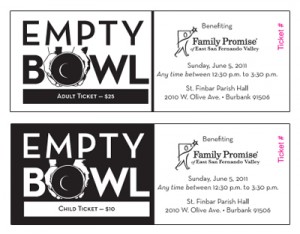 I started out first with the tickets.  The tickets were fairly straight-forward, but I did have to find a way to easily distinguish between the adult and child tickets for the event.  In this instance, I chose to reverse the logo on black, which I think also really works for this event.  We will have a finite number of handcrafted bowls that will be donated to us by various potters in the area, so we had to number the tickets, which the printer will do for us in the printing process.  I just had to indicate on my file where I wanted the ticket number to go. 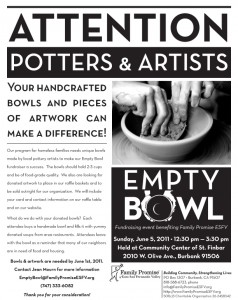 Then I started working on a promotional flyer to be distributed to the potters and the artists who will help support our event.  I started out with the text for the flyer (taken from another Family Promise Empty Bowl event and adapted to fit our own) and the logo…and not much else (other than the fact that I had since discovered after creating the logo that the event committee decided to make the decor of the event black and white, based on the logo, which made my color selection for the poster quite easy!).  Besides the logo, I didn’t have any graphics, so I bought a stock photo that evoked the idea we wanted to get across, and converted it to greyscale to match our black & white theme.  From there, everything fell into place.  I had some initial hesitation of what to do for this flyer, but it turned out that this flyer was very fun for me to create and, of everything I’ve created for this fundraiser, is my favorite design.  I think it came together really well, although I wish there was slightly less text on the whole. 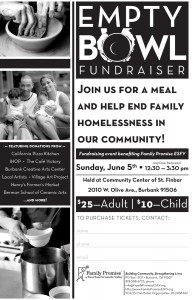 After finishing the potters’ promotional flyer, I had to create a promotional flyer for the whole event.  This poster had to fall within  the same theme/look/style, but had to convey different information and had to be WAY less text-heavy, and would be twice as large as the potters/artists flyer.  Which meant, in part, finding more graphics to help illustrate what the event is all about.  I selected one of the family photos that I have been given from Family Promise national (a real Family Promise family who graduated from the program, but not a family who has graduated from our program…understandably, very few of our families have signed a photo release allowing us to photograph them).  I like the series of pictures I have of this family very much (good quality, interesting shots), and used a different picture of the same family in our brochure, which I think works very well.  So I selected a picture of a family to remind people of the purpose of the event.  I also found a stock photo of soup being served, to convey what will actually happen at the event.  I suppose in years to come, we can use our own photos taken at these events, but for now stock photos have to suffice.  I still had space, so I decided to add the initial donors we have confirmed for our event.  It won’t include everyone — we still have much work to do to find more donors, but it’s a start, and it shows people that our intention is to offer quality in both food and artistry.  I finished up the poster with the necessary text (who, what, where, when, why) and the left a portion of the poster customizable, so that each person who is selling tickets at their respective congregations can add in their own contact information. 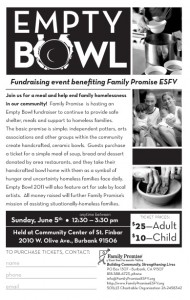 Next came the bulletin insert, for the various congregations to insert into their weekly worship bulletins.  On the bulletin insert, it had to be similar to the flyer, but with more information so that the congregants would know more about the event.  Enter in the press release.  Our Family Promise board member Mary Anderson-Harris specializes in PR, and had already spent time drafting a press release for the event, which she will distribute to the various media sources we’ve identified.  I simply cut and paste the press release information and pared it down a bit, which was nice because it saved me the time it would have taken me to write up a blurb about what our Empty Bowl fundraising event is. 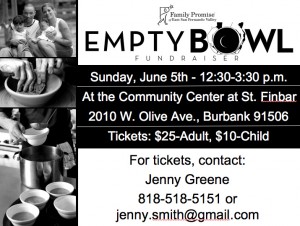 Finally (for now), I created a PowerPoint slide.  Some congregations (including mine) use PowerPoint in their services, so I thought it would be a good idea to have a slide pre-made so they could insert into their presentation and add in their own contact information re: ticket selling.  The Empty Bowl logo as it was created didn’t fit too well with PowerPoint’s constrained dimensions, so I altered the logo to be in one straight line.  I found it really difficult to fit everything into the slide, while still maintaining the big font that is necessary to read from a distance.  I haven’t tried it out yet on the “big screen,” but I think it’ll be OK.

And, there you have it.  Part of the reason why I’ve been so busy in the past few weeks — creating all of these various marketing/promotional pieces for the Empty Bowl fundraiser, creating a lot of landing pages, and a wedding logo/save the date project which I hope to blog about soon have made for a very busy Jenny in the latter half of March!

Jennifer Smith Greene is originally from and lives currently in Burbank, California with her husband Gavin Greene. Jenny completed her undergraduate degree from Woodbury University in Graphic Design. She has worked as a graphics & web designer, both as an in-house and freelance designer. She also has completed a Master of Divinity (MDiv) degree from Princeton Theological Seminary. She has worked as a hospital chaplain and in support roles in various churches. In her spare time, Jenny enjoys watercolor painting. She has taken classes and workshops under Joseph Stoddard, Tom Fong, Danny Gregory and Jane Friend. Additionally, Jenny is active in the community and volunteers her time on the Board of Family Promise of East San Fernando Valley, a social service nonprofit dedicated to helping homeless children and their families by providing shelter and support services to help the families find jobs and housing. Jenny enjoys reading (and highly recommends the site Goodreads), watching movies, playing softball and tennis and taking walks with her husband. Otherwise, Jenny is always curious to find out about those people who come to her site and would love to hear from you!
View all posts by jenny →
This entry was posted in black and white, bowls, bulletin insert, empty bowl, family promise, flyer, fundraiser, marketing materials, poster, pottery, powerpoint, soup, thoughts. Bookmark the permalink.