Jenny’s Having an Art Show! 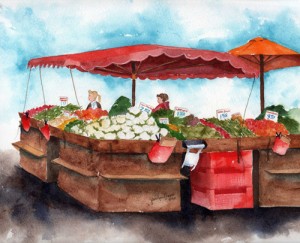 business. Marsha had been having gallery showings in her office lobby of various Burbank Art Association members, and this restauranteur wanted to do something similar at his restaurant, so Marsha recommended me!

This is very exciting because I have wanted to do something like this, but did not know how to go about getting that sort of opportunity. It’s so wonderful when the opportunity falls in your lap! (Thanks, Marsha!) But — it means a lot of work. I found out mid-March that I had been selected by the restaurant, and he wants to start the show

in April (**UPDATE — We are changing the show to be from May 1-31**)…and he wanted about 15 paintings. Thankfully, I didn’t have to paint anything fresh (no time for that right now, especially not 15 pieces!) because I have a pile of paintings I’ve painted over the years that I haven’t done anything with.

So, Gavin and I went through the pile and tried to select the bigger paintings that were the best among my pile. Then we had to figure out framing because none of the pieces were framed. We debated between getting them custom-framed or doing it ourselves. What’s great about Gavin is that he is knowledgeable in areas that I am not — like accounting. We went to Aaron Brothers to 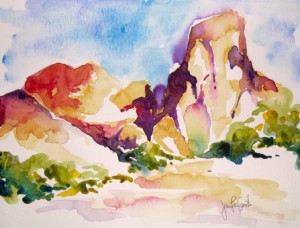 figure out, on average, how much it would cost me to frame them versus what it would cost to have them custom framed. Then we went to the framer that I use from time to time and we got an even better deal from him than we estimated! Which is so great because not only does this framer do great work, but also because I dislike framing in general and it saves me a ton of work and keeps the finished pieces at a reasonable cost. 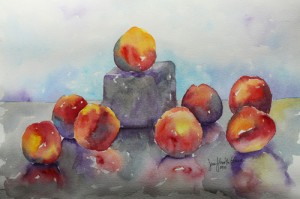 So, I spent time today at the framer’s, picking out the frame (a simple, dark-wood frame that will work for all of the pieces) and we decided to have the same white mat for all of the pieces and vary the fillet (the inner mat) to match each painting to make it pop. I think it’s all going to look very, very nice. And even if nothing sells, I will now have some of my artwork to put up around my apartment. 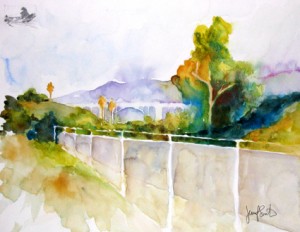 I don’t have scans of all of the pieces (I would have gotten some, but I’ve had to act quickly!), but for some of the pieces I do, so I’ve posted them throughout this blog post. For the rest of them, you’ll just have to go see them in person! Here are the details:

Jennifer Smith Greene is originally from and lives currently in Burbank, California with her husband Gavin Greene. Jenny completed her undergraduate degree from Woodbury University in Graphic Design. She has worked as a graphics & web designer, both as an in-house and freelance designer. She also has completed a Master of Divinity (MDiv) degree from Princeton Theological Seminary. She has worked as a hospital chaplain and in support roles in various churches. In her spare time, Jenny enjoys watercolor painting. She has taken classes and workshops under Joseph Stoddard, Tom Fong, Danny Gregory and Jane Friend. Additionally, Jenny is active in the community and volunteers her time on the Board of Family Promise of East San Fernando Valley, a social service nonprofit dedicated to helping homeless children and their families by providing shelter and support services to help the families find jobs and housing. Jenny enjoys reading (and highly recommends the site Goodreads), watching movies, playing softball and tennis and taking walks with her husband. Otherwise, Jenny is always curious to find out about those people who come to her site and would love to hear from you!
View all posts by jenny →
This entry was posted in art, art show, bridge, farmers market, floral, flowers, nectarines, painting, sneak peak, still life, watercolor. Bookmark the permalink.

7 Responses to Jenny’s Having an Art Show!