Way back at the beginning of February, I took a glass slumping class.  Sounds a little dirty, but I assure you it is not!  What glass slumping is is taking pieces of glass and fusing them together with a first firing in a kiln, then placing the glass on a mould and firing the glass again, making the glass slump into the shape of the mould.

In this class, I learned more about the technique of cutting glass, including how to cut glass in a circle.  However, for this class, I opted not to do a round bowl, but a shallow, oval dish (that I affectionately call “the pickle”) and I did a little, square dish (which I now store my earrings and rings in!).  I also had a little more room left on my firing shelf, so I opted to do another window vase (predictable, I know — I just love making them!).

Without further adieu, here are pictures of my slumped glass, taken expertly by my husband Gavin: 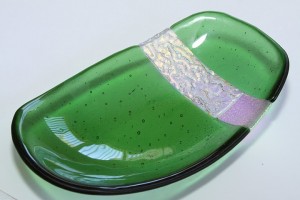 This is the dish I like to call “The Pickle.”  Actually, there is this cartoon series called VeggieTales and this particular glass dish reminds me of Larry the Cucumber, wearing a headband.   At any rate, I think the green glass is pretty, and I especially love looking at it on my table at night, since when the light shines on it, it casts a green and purple shadow (purple coming from the iridescent glass that is alternately gold/green/purple).  The bottom piece of glass is that beautiful green with the iridescent pieces (same color, although one piece has a texture to it), and a piece of clear glass was placed on top in order to give the glass coloring a depth.  It also makes the glass food-safe, since the iridescent pieces are not safe to put food upon. 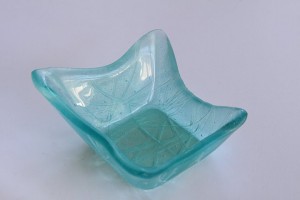 This piece was placed in a square mold, but the way the glass slumped in the kiln, it came out off-center.  Normally, that sort of thing would bother me, but I think it looks entirely appropriate and wonderful and makes a great earring holder!  The top piece of glass is that aqua glass, and the piece underneath it is an iridescent clear piece with stringers in it, which makes an interesting pattern. 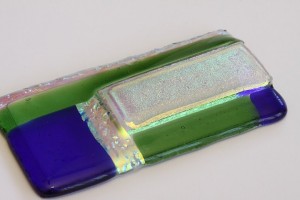 For this window vase, I decided to use the colors that I had been using in the first piece.  I added some dark blue for contrast.  Gavin really liked how this piece came out…still mostly transparent, but using very bold colors.  It looks neat against the window when the sun shines through!

Jennifer Smith Greene is originally from and lives currently in Burbank, California with her husband Gavin Greene. Jenny completed her undergraduate degree from Woodbury University in Graphic Design. She has worked as a graphics & web designer, both as an in-house and freelance designer. She also has completed a Master of Divinity (MDiv) degree from Princeton Theological Seminary. She has worked as a hospital chaplain and in support roles in various churches. In her spare time, Jenny enjoys watercolor painting. She has taken classes and workshops under Joseph Stoddard, Tom Fong, Danny Gregory and Jane Friend. Additionally, Jenny is active in the community and volunteers her time on the Board of Family Promise of East San Fernando Valley, a social service nonprofit dedicated to helping homeless children and their families by providing shelter and support services to help the families find jobs and housing. Jenny enjoys reading (and highly recommends the site Goodreads), watching movies, playing softball and tennis and taking walks with her husband. Otherwise, Jenny is always curious to find out about those people who come to her site and would love to hear from you!
View all posts by jenny →
This entry was posted in art, blue, glass, green, iridescent glass, slumping, vase, window vase. Bookmark the permalink.

One Response to Glass Slumping Class